You are here: Home1 / LASIK 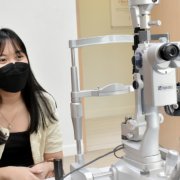 The struggles have to end at some point for Tiffannie Cabudsan, 23.

She tells her heartfelt story.

Ever since I was a kid, I was struggling with poor vision. Every new semester in school, my mom had to request for the teacher to place me in the front seat so that I won’t have a hard time seeing the writings on the board. At the age of 12, I had my eyeglasses with an eye grade of 200/250, as far as I remember, and it kept on progressing until my eye grade was already at 500 by the time.

With three daughters studying in a private school, my parents had a tight budget, so I couldn’t change my glasses monthly to correct my eye grade.

My eye grade peaked at 800 on the right eye and 750 on the left with astigmatism.

Fortunately, I came across Shinagawa and I was able to get my eyes treated via LASIK in time before I go legally blind. Now, my vision is 20/20 and the world is in HD!

However, my LASIK journey was not smooth sailing at all. At first, my mom was fully against the idea. My mom had a misconception about LASIK that it’s dangerous, it will make you go blind, and it’s painful.

One day I casually mentioned to her that I’ll get a LASIK someday and she said that there were still other options to cure my poor vision which was the herbal remedy. Knowing her reaction about LASIK, a few days before my surgery, I talked to my sister to help me convince my mom to come along on the day of my surgery.

When I finally told her about it, she was shocked and at a loss for words, and even without her saying anything I know that she was fully opposed to it with a few statements mentioned by my sister “It’s for the best and the result is for a lifetime” and “to grab the opportunity as they don’t often come along” my mom accompanied me on the day of my surgery. Her initial reaction after the surgery was she was relieved and thankful for a successful surgery.

As for me, it feels surreal and I feel like a different person after LASIK!

Share your LASIK story with us, too!
For inquiries, questions, and appointments, call our Patient Care Lines:

Talk to our Consultants via Livechat: https://shinagawa.ph/

ON LIFE AND LOVE AFTER LASIK

“When I had my LASIK in 2021, all I wanted was to have a clear vision. Little did I know that there’s much more ahead along with it — a new vision, new career, new hobby, and new love!

After my LASIK surgery- everything was clear to me. Not just my vision but also my perspective in life. I became more confident and fearless! I got accepted into a new company that I really want to work for; then I met this guy who encouraged me to try freediving, and later on, became the love of my life! 🤭

I was beyond grateful for the turn of events. To add to my surprise, he revealed that he also had LASIK at Shinagawa a few years ahead of me.

Everything became clearer: If I didn’t push myself to do the surgery, I wouldn’t be who I am right now. I might not be into diving and I wouldn’t have met him.”

LASIK has definitely allowed the couple to embark on an exciting hobby that became one of their favorite bonding moments — free diving.

Being a seller is no easy task, more so with blurry vision.

With a 20/12 vision after having LASIK, Riza Montemayor Ramsey, a housewife, and online seller is now sharper as an entrepreneur.

“Amazing Ultra LASIK! It feels so good and comfortable to have better eyes and vision now! Shinagawa’s team is really great, especially the doctors. You guys are the best!” expressed Riza.

Riza added that she was in awe of the world-class facilities of Shinagawa BGC, the country’s most innovative and largest eye clinic to date.

“I’m recommending this Shinagawa BGC branch to everyone. It’s the best!”

If you’re tired of wearing contact lenses, enough of it already. Schedule your LASIK screening!

Since its approval two decades ago, LASIK surgery has grown in popularity among people who wear glasses or contact lenses.

LASIK, like all revolutionary medical procedures, evolved over time. The study and precision of the procedure led to its current high standard of safety and effectiveness.

Here’s a quick look at the history of LASIK so you can see how it went from an unproven surgery to the one we trust today.

Since the 1800s, surgery has been used to treat refractive eye conditions. Radial Keratotomy (RK), a treatment for nearsightedness that involved making tiny radial cuts in the surface of the cornea, was first used in 1898. But because this method depended a lot on the surgeon’s hands-on skills, it didn’t work very well.

In the early 1960s, an eye doctor named José Barraquer came up with a procedure called keratomileusis, which means “carving the cornea” in Greek. Dr. Barraquer would remove a piece of corneal tissue with a surgical blade called a microkeratome. The tissue was then frozen, reshaped, and reapplied to the eye’s surface.

A 60-year-old woman with severe vision problems allowed surgeon Marguerite McDonald to perform the first PRK procedure on her damaged eye in 1988.

LASIK as we know it today

LASIK vision correction has become relatively common. Approximately 700,000 LASIK surgeries are performed each year, according to the most recent study.

As with any surgery, LASIK vision correction success depends on patient suitability.

Contact us today to schedule a Comprehensive Eye Screening to find out if you’re a LASIK candidate. We look forward to seeing you!

Working in a call center setup can really be challenging that’s why it’s essential to have good eyesight to be on top of things.

Kim Cassandra Majam, being a Call Center Team Leader, did herself a favor by having LASIK help her everyday cause.

“Having LASIK was the best decision and the best gift to myself!”

Bright eyesight is one of the best gifts you can give yourself! Schedule your LASIK screening now!